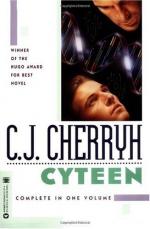 Everything you need to understand or teach Cyteen by C. J. Cherryh.

In her Alliance-Union novels Cherryh moves away from her early preoccupation with depicting alien psychologies through brilliant linguistic and anthropological creations, such as the mri of The Faded Sun (1978). Her 1989 novel Rimrunners, for example, deals solely with human members of merchant and Fleet crews. In Cyteen, a dense, complex investigation into the economic and social ramifications of startling discoveries in psychology and sociology, the "other" perspective is never quite alien and yet not entirely human. It belongs to the azi — artificially gestated, genetically-engineered humans that are indoctrinated from birth by specially designed types. The azi are the crux of Cyteen's interlocking themes.

Ruling the planet Cyteen are the born-men, or "CITs," who led a successful revolt against the planet Earth and founded their own nine-planet Union. They have established a grid of star stations that allows interstellar trade and promises enormous profit through...

C. J. Cherryh
1,675 words, approx. 6 pages
Since the publication of her first fantasy novel in 1976, C. J. Cherryh has drawn praise from critics and readers alike as both a consummate storyteller and a writer of what Thomas P. Dunn calls "spec... Read more
Download the Study Pack