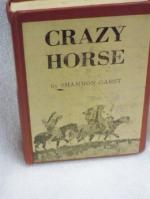 Get Crazy Horse: Great Warrior of the Sioux from Amazon.com

Everything you need to understand or teach Crazy Horse by Doris Shannon Garst.

Garst provides interesting insights into the Sioux's way of life, customs, and heritage. She depicts Crazy Horse and the Sioux as people who defend themselves and their way of life when threatened. For the most part, the Sioux and the other Native Americans were unjustly and viciously treated by the white settlers and the U.S. government, and Garst's exploration of these injustices makes for thought-provoking reading.

Tracing Crazy Horse's life from adolescence to adulthood, Garst also deals with some of the problems and conflicts that comprise every young person's life.

Crazy Horse learns the importance of making his own judgments; he learns about responsibility when he tames Strongheart, his raven-black stallion; and he learns from those who are older and wiser when he accepts the teachings of his shaman...