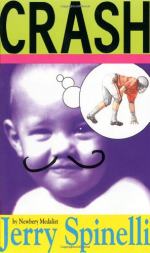 Get Crash (Jerry Spinelli) from Amazon.com

Jerry Spinelli's "Crash" novel takes place over the course of John "Crash" Coogan's seventh grade year with brief glimpses of his life when he was younger. During his seventh grade year, John is forced to confront his changing stances on violence, aggression, and bullying. In particular, John has to think about who he really is and whether his true thoughts, feelings, and actions match up with the ultra-competitive and physically dominant...