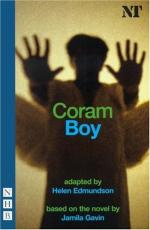 Get Coram Boy from Amazon.com

Everything you need to understand or teach Coram Boy by Jamila Gavin.

Winner of the 2001 Whitbread Award, Coram Boy relates the intertwining stories of Meshak Gardiner and Alexander Ashbrook, two young men of different abilities and backgrounds who nonetheless find their fate inextricably linked. Meshak, the mentally handicapped son of Otis Gardiner, helps his father dispose of unwanted children; generally infants whose mothers think that Mr. Gardiner will transport them to Coram Hospital, a newly-created facility to care for abandoned children. Able to convince the distraught mothers that their newborns will be well-cared for in exchange for a small fee, Mr. Gardiner later hands the infants over to Meshak, who then buries the children in the woods. Years of burying infants and selling older ones into slavery have made Mr. Gardiner rich, but one day he is accused of blackmailing the wealthy mothers of these children. Everyone believes that he was hanged for his crimes and that his son, Meshak...