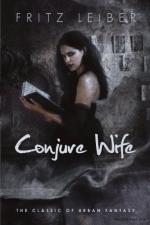 Get Conjure Wife from Amazon.com

Everything you need to understand or teach Conjure Wife by Fritz Leiber.

Most writers who have been forced to make ends meet through college teaching have eventually published a university novel; Conjure Wife is Leiber's unusual entry into the subgenre. Hired to teach speech and acting at Occidental College in Los Angeles in September of 1941, Leiber quit after only one year despite having earned a reputation as a competent teacher. That he disliked the politics of university life can be inferred from the basic premise of his novel. Various biographers have argued that Hempnell College is either Occidental College or Leiber's alma mater, the University of Chicago, though it probably partakes of both.

Saylor does not at first believe that Tansy's magic has protected him, even after things start to go wrong for him.

Eventually, however, he begins to realize that women's magic is not only real, but ubiquitous. He and the rest of male society...

Fritz (Reuter) Leiber, (Jr.)
5,996 words, approx. 20 pages
Fritz Leiber is one of the durable masters of science fiction. For forty years he has been delighting his readers with a wide range of stories--from hard science fiction to widely acclaimed fantasy. F... Read more
Download the Study Pack