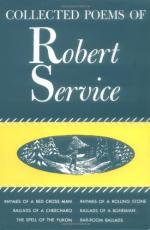 Get Collected Verse from Amazon.com

Everything you need to understand or teach Collected Verse by Robert Service.

The ballads and poems of Robert Service have sparked the imagination of generations of young readers. Delightful to recite aloud, many of his poems portray the colorful, dramatic adventures of life in the Yukon during the fabulous gold rush of 1898. His most famous poems create, through their enchanting rhythms and descriptions, a sort of romantic spell, giving an impression of life that is full of excitement and expectation. So vividly does Service describe "the spell of the Yukon" that many of his readers have been actually lured to experience the rugged life of the Yukon for themselves. For Service, the Yukon is a land of magic and high adventure, but it is also a harsh land that tests the courage and stamina of those who venture into it. The Yukon brings out the very best and sometimes the very worst of human nature.

Because these poems are so...