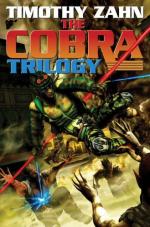 Get Cobra from Amazon.com

Everything you need to understand or teach Cobra by Timothy Zahn.

Cobra's themes are tightly interwoven with its plot and social concerns.

Its cover blurb extols the excitement of high-tech weaponry and seems to promise a heroic battle saga. Despite this, the book's themes are deeply humanistic. Actual battles take up only a few pages. Jonny's heroism does not stop with his odds-defying breakout from a Troft stronghold on Adirondack. It is also evident when he takes on the challenge of proving himself anew to his neighbors upon his return, when he defies the planned military coup on Aventine, and when he returns to work for his new home world's prosperity, even at the price of being cut off permanently from the rest of the human worlds.

The overarching theme is more complicated than "war is hell," although it includes that message. Yes, war is hell, Zahn seems to be saying, but it will probably still be with us...