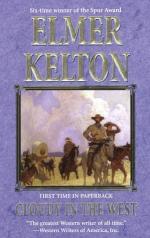 Get Cloudy in the West from Amazon.com

Everything you need to understand or teach Cloudy in the West by Elmer Kelton.

Cloudy in the West Summary

Cloudy in the West is the story of how twelve-year-old Joey Shipman learns to face with maturity the many problems that plague his life. Born and reared on the Shipman Ranch near Athens in East Texas, Joey's real mother has already died at the beginning of the story, and his father and his only other friend die shortly thereafter.

Without parents, Joey is left in the custody of a stepmother and her "cousin" who are determined to take ownership of the East Texas ranch Joey had inherited from "Pa." The stepmother inherits the property if Joey dies, and the boy finds his life in danger. Mysteriously, a bull attacks .

him, then several weeks later he finds a rattlesnake in his bed. Believing that his stepmother is behind the attempted murder, he flees to his only living relative, a second cousin named Beau, who has a reputation as an...

The Cloudy in the West Study Pack contains:

Cloudy in the West Short Guide