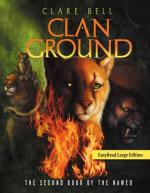 Get Clan Ground from Amazon.com

Everything you need to understand or teach Clan Ground by Clare Bell.

In Clan Ground, Clare Bell creates a suspenseful fantasy set in a believable alternate universe. She addresses issues of leadership, technology, and social development through a story about Ratha, the leader of an intelligent band of wildcats called the Named.

The story is a beast tale—a type of animal fantasy that depicts the ways of animals within the natural world while also using the animal characters to comment on human society. Even though the animals in Clan Ground behave in ways that are instinctive and animal-like, they also possess speech and intelligence. Their efforts to build and maintain their way of life dramatize the human struggle to create a lasting culture. Bell uses her story to highlight other real-world concerns, such as the value of freedom, the changes brought about by new technologies, the meaning of responsible leadership, and the role of religion in shaping both...