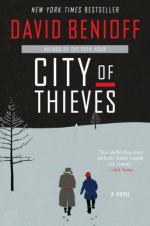 Get City of Thieves from Amazon.com

Everything you need to understand or teach City of Thieves by David Benioff.

Set in Russia during World War 2, City of Thieves follows the adventures of 17-year-old Lev as he and Kolya, a 20-year-old Russian Army officer, must find a dozen eggs for the wedding of a colonel’s daughter during the siege of Leningrad. After they leave Leningrad in search for eggs, Lev falls in love with Vika, a sniper whose ultimate goal is to kill Abendroth, a leader of the German army who has killed countless people. Mostly told from Lev’s perspective, the novel explores how timid, fearful Lev finds the courage to fight and kill Abendroth. The novel sheds light on themes of courage, friendship, love, words, and moral ambiguity.