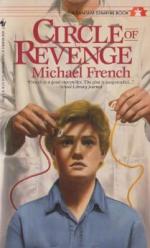 Get Circle of Revenge from Amazon.com

Everything you need to understand or teach Circle of Revenge by Michael French.

When Robbie Cavanaugh, just fired from his part-time job and financially broke, reads this notice, he believes that this is the answer to all his problems. With this job, he can pay back his friend Carlos Montano, who recently moved to Beverly Hills from South America, and take his friend, Samantha Matthews, out for a date. Robbie decides to go for it. Thus, the author begins to set up the pattern that would pit evil against good through manipulation, mind control, terror, and murder.

Accepted for the position by Dr. Edward Salazar, a well-known psychologist, Robbie is introduced to the control room of Bungalow #66. It is on the screen in this darkened room that he is shown film of a young man about his own age who was in a dirty, cramped cell. It is obvious that he is terrified. In subsequent sessions, Robbie views the torture of...