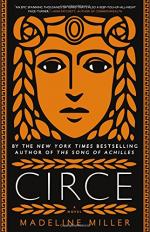 Get Circe from Amazon.com

Everything you need to understand or teach Circe by Madeline Miller.

Madeline Miller's sophomore novel relates and expands upon the Greek myth of Circe, the nymph enchantress most famous for her role in book 10 of Homer's Odyssey, who was renowned within Hellenistic society for her vast knowledge of transformative magics, potions, and herbs. Drawing from the work of classic tragedians such as Euripides, from epic poets such as Homer, and from etiological myths surrounding Circe's lineage, Miller chronicles, over 27 chapters, the life of her main character. The narrative begins with Circe's birth, details her famed encounter with Odysseus on the island of Aiaia, and ending with the events of the Telegony — the murder of Odysseus by Circe's son, Telegonus. Narrated in the first person from Circe's perspective, this novel explores themes of agency, femininity, and spirituality, as they appear both within the Hellenic era as well as the era in which this retelling is read.