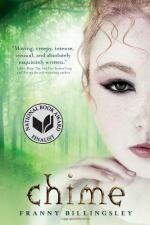 Get Chime from Amazon.com

Everything you need to understand or teach Chime by Franny Billingsley.

A stepmother dies, a library burns and a sister falls ill. These are some of the events that seem to encircle Briony, the daughter of a preacher in a small bog village where the Old Ones (witches and warlocks) still reign supreme, having been around for hundreds of years. Villages need to carry around bible-balls, pieces of the bible, in order to walk through the swamp, and if they forget they are subject to frightening imagery or even attacks and death. Briony is not an ordinary villager, she believes herself to be a witch, as well as responsible for many of the problems surrounding her family and the village itself. The Chime Child, a girl who has been born at midnight between the living and the Old Ones serves as a justice and communicator between the two groups, judging whether or not a member of the community is a witch and doing her best to quell any issues that arise. The villagers are about to drain the bog in order to build on the land, an event that angers the bog itself which curses members of the community with the fatal swamp cough. Briony, embroiled in all of this due to her ability to speak to these Old Ones and her belief that she is a witch, works to save the bog, the villagers, and her sister as a result.

Franny Billingsley
2,034 words, approx. 7 pages
Although Franny Billingsley's works for children included only two titles by 2000, she has gained recognition as an important figure in the world of juvenile fantasy. With Well Wished and The Folk Kee... Read more
Download the Study Pack