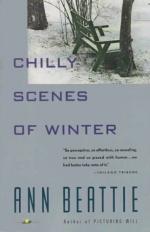 Get Chilly Scenes of Winter from Amazon.com

Everything you need to understand or teach Chilly Scenes of Winter by Ann Beattie.

Beattie maintains that her work is about chaos. In those terms Charles is controlling the disillusionment of his life and times by engaging in a romantic quest. Chaos is the consequence of overexpectations created by too much personal freedom and not enough historical awareness, stereotyped characteristics of the members of the 1960s generation. Charles has never really wanted anything until he wants Laura.

In the 1970s his cohorts have lost all sense of common purpose and have few traditional ambitions, but love is still a worthy goal. Once it is achieved, however, the need for freedom asserts itself, and therefore Chilly Scenes of Winter ends on an inconclusive note, despite the fact that Charles does win Laura.

Two symptoms of underlying chaos are dislocation and displacement. The idea that these are inevitable consequences of the Baby Boom generation's roller coaster ride through the 1960s is one of Beattie's...

Ann Beattie
7,771 words, approx. 26 pages
Ann Beattie is a novelist and short-story writer whose evocations of American life at the end of the twentieth century have earned her a wide readership and sustained critical engagement for more than... Read more

Ann Beattie
11,033 words, approx. 37 pages
Ann Beattie's powerful contrast in her writing of tellingly detailed descriptions and stark silence has caused her work to be placed in the contemporary canon of literary minimalism, a movement identi... Read more
Download the Study Pack