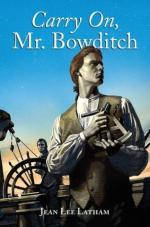 Get Carry On, Mr. Bowditch from Amazon.com

Everything you need to understand or teach Carry On, Mr. Bowditch by Jean Lee Latham.

A fictionalized biography of a great American navigator and astronomer, Carry On, Mr. Bowditch authentically portrays the life of a unique individual.

Latham depicts the boyhood and young adult life of Nathaniel Bowditch, who lived from 1773-1838. The account ends with his fifth voyage, which takes place when Nat is in his early thirties.

Brilliant in mathematics, Bowditch wanted to study at Harvard, but his family could not afford the cost. At the age of twelve, he was indentured for nine years to a firm of ship chandlers in Salem, Massachusetts, so he diligently studied on his own, pursuing astronomy, mathematics, algebra, navigation, Latin, French, and Spanish. Men of the town encouraged him and gave him privileges in private libraries. While in his early twenties, Bowditch went to sea as ship's clerk and second mate. On board, he continued to study and also taught navigation to the common...