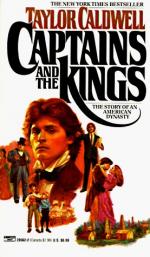 Get Captains and the Kings from Amazon.com

Everything you need to understand or teach Captains and the Kings by Taylor Caldwell.

Captains and the Kings Summary

One theme is the greed of those who have, as opposed to the ignorance and credulity of those who have not. The story is of Joseph Armagh's revenge on a world that forced him to deny his own identity as an Irishman and as a "Roman" (Catholic). By Joe's own characterization, mankind is the most selfish species ever "spewed out of hell," and the novel is consistent with this vision. Joe's ruthless climb to the top is a joyless quest devoid of humor, satisfaction, or empathy.

Because the inevitable assassination of his son Rory Armagh is accompanied by references to the apocalyptic vision of St. John the Divine who foretold the enslavement of the world, there is as well a lesson in the implacability of Biblical prophecy. The last true episode of the book is a scene with Sister Mary Bernarde in a Maryland convent. The room smells...

The Captains and the Kings Study Pack contains:

Captains and the Kings Short Guide