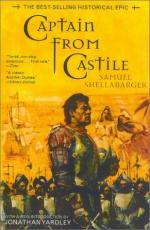 Get Captain from Castile from Amazon.com

Everything you need to understand or teach Captain from Castile by Samuel Shellabarger.

Captain from Castile takes place during one of the most exciting periods in western history — the conquest of Mexico by Cortes and the opening up and exploration of the New World. The conflict between Cortes, the daring and ruthless adventurer driven by glory and gold, and Montezuma, the gentle and generous Aztec king committed to a religion of bloody human sacrifice, is one of the great stories in history and is one of the important concerns in the novel. Through Pedro's adventures, Shellabarger describes the conquest of one culture over another and the victims left behind — in this case the unfortunate Indians — in Western civilization's determined march onward.

Another substantive theme can be found in the author's depiction of the crosscurrents in the character of sixteenth-century Spain — a strange mixture of wanton cruelty and religious zeal — that marked Spain's emergence from, medieval to...