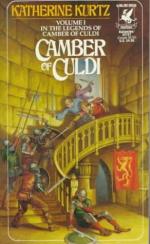 Get Camber of Culdi from Amazon.com

Everything you need to understand or teach Camber of Culdi by Katherine Kurtz.

Within a framework of politics and religion, Kurtz takes as her theme the idea of social responsibility and the price it sometimes exacts. The king, Imre, is dethroned because he is capricious, unjust, and dangerous to cross: He orders the destruction of entire villages and religious orders, murders his best friend, and commits incest with his sister.

Yet Camber, undeniably on the side of justice and order, is himself the instigator of a series of questionable acts: a kidnapping, the coercion of a harmless and religious monk, a forced marriage, the dethroning of an annointed king, and ultimately, the vast deception entailed by the assumption of another man's identity.

All this he does for the good of the kingdom of Gwynned: the end, Kurtz seems to say, justifies the means.

Nevertheless, in the long run it is perhaps Imre who gets off the most easily.

Katherine Kurtz
3,255 words, approx. 11 pages
The tyrannical young King Imre, hated by many in the medieval kingdom of Gwynedd for his injustices against the people, has just murdered courtier Cathan MacRorie, who has been like a brother to him a... Read more
Download the Study Pack