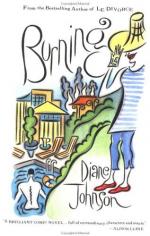 Get Burning from Amazon.com

Everything you need to understand or teach Burning by Diane Johnson.

The events in Burning all take place on a single day in Los Angeles, the day of the great Bel Air fire. But before the actual fire is so much as ignited, Johnson begins using it as her central metaphor in a novel that satirizes California's child welfare system, the drug scene, and above all the lifestyles of people living in Southern California.

Maxine ("Max") Gartman finds that her children may be taken away from her if she is found to be an unfit mother. In fact, she has a serious drug problem, but she persuades Bingo Edwards, her psychiatrist's neighbor, to pose as herself in the hope that Bingo's evidently straight character will stave off the do-gooding bureaucrats. Bingo's day is almost entirely taken up with interviews with social-welfare people, who finally determine — much to her outrage and chagrin — that she...