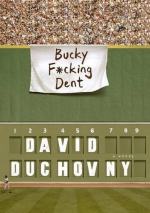 Get Bucky F*&ing Dent from Amazon.com

Everything you need to understand or teach Bucky F*&ing Dent by David Duchovny.

Bucky F*cking Dent is the second novel from actor and writer David Duchovny. The book follows struggling novelist and peanut salesman Ted Fullilove whose life changes when he learns that his father, Marty, is dying from lung cancer. The two reconnect, find and rediscover love, and learn more about each other and themselves than they ever thought they would. Several narratives interweave throughout the story including stories about sick children and the 1978 season of the Boston Red Socks.