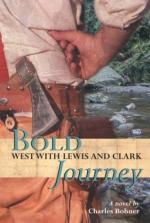 Get Bold Journey from Amazon.com

Everything you need to understand or teach Bold Journey by Charles Bohner.

Bold Journey, subtitled "West with Lewis and Clark," is the story of the small band of explorers commissioned by President Jefferson in 1804 to explore America's great northwest, areas never before visited by white men. As told by Hugh McNeal, an eighteenyear-old army private, however, it becomes much more than a story of adventure and exploration. It is the story, also, of a young man's coming of age—learning about himself, his fellow human beings, and the world he lives in. The lessons Hugh learns are thus important to any young person growing up in a world of adults, developing his own character, personality, and values for a lifetime.

Hugh's experiences not only mature him, they make him into a more sensitive and open-minded human being than he was at the outset of the journey. Thrown in with a bunch of strange men, including seasoned army veterans, French...