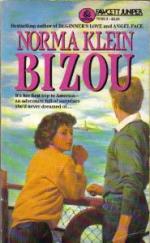 Get Bizou from Amazon.com

Everything you need to understand or teach Bizou by Norma Klein.

Bizou is the story of two weeks in the life of Eliane, a thirteen-year-old girl whose American mother is a freespirited black fashion model in Paris, and whose deceased father was a French photojournalist Bizou, Eliane's nickname, relates in first-person narrative the events and her thoughts during this brief, but fateful period.

The novel opens as Bizou and her mother, Tranquility, travel from their home in Paris to the United States.