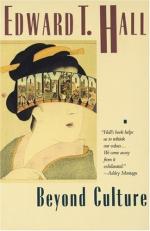 Get Beyond Culture from Amazon.com

Everything you need to understand or teach Beyond Culture by Edward T. Hall.

As a young man, Edward Hall worked as a construction foreman in Arizona, where he lived and worked with the Hopi Indians and later he conducted anthropological research among the Navajo Indians. During this time, he also gained firsthand experience of the Spanish American people and culture of Northern New Mexico. Hall's considerable experience of the Japanese culture came from his work as a consultant for the United States Government, where...

The Beyond Culture Study Pack contains: