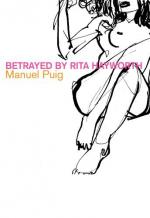 Get Betrayed by Rita Hayworth from Amazon.com

Everything you need to understand or teach Betrayed by Rita Hayworth by Manuel Puig.

As Puig explained in an interview, Betrayed by Rita Hayworth was partly an explanation of why he was in Rome, at age thirty, without a career, without money, and discovering that his life's vocation — the cinema — had been a mistake, a neurosis and nothing more. Writing the novel, Puig claims, was an attempt to understand this failure. However, Puig goes beyond the personal aspect of the novel to expand what he discovered from his own experience to a universal theme: the betrayal of reality by illusion. Each of the characters in the novel reveals a different perspective on this betrayal.

First, there is the protagonist Toto.

He is an imaginative and, as his father bemoans, effeminate boy who enjoys nothing more than going to the movies with his mother, Mita. Afterwards, he and his mother spend hours discussing the film and drawing pictures of...

Manuel Puig
5,810 words, approx. 20 pages
Though Manuel Puig has most recently come to the attention of the general public through the successful 1985 filming of his novel El beso de la mujer araña (1976; translated as Kiss of the Spid... Read more
Download the Study Pack