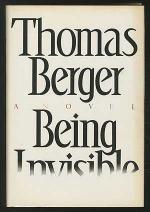 Get Being Invisible from Amazon.com

Everything you need to understand or teach Being Invisible by Thomas Berger.

There are two kinds of invisibility in Being Invisible. One is involuntary: Wagner becomes invisible in society as he loses his job and women use and discard him.

Although talented, Wagner is essentially an unheroic figure who tries to survive each day. His very goodness may be what dooms him: Unwilling to be spiteful and unwilling to bully, he is abused; society simply will not reward a good man for being good. Examples surround him of no-talent fools and bullies who live better lives than he does. In Wagner's complex urban world, the people who stand out and advance up the social hierarchy are those who are loud enough to call attention to themselves; it is as if urban society has no respect for talent or unselfishness, using and then discarding talented, good people.

The second kind of invisibility seems to contradict the first. It is voluntary.

The Being Invisible Study Pack contains: