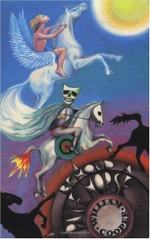 Get Behold a Pale Horse from Amazon.com

Everything you need to understand or teach Behold a Pale Horse by William Cooper (novelist).

William Cooper offers a lengthy analysis of the state of global events, presenting information, which he claims is secretly held by governments. Cooper argues that numerous secret societies exist, which were organized into a single massive society c. 1953; that a Secret Government, which controls everything, was established shortly after World War II; that the government seeks to eliminate population through various means and that extra-terrestrial intelligent life exists and often visits...