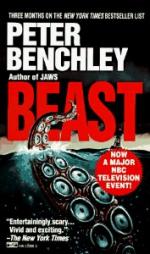 Get Beast from Amazon.com

Everything you need to understand or teach Beast by Peter Benchley.

Beast echoes Benchley's Jaws (1974; see separate entry). Benchley replaces the white shark in this novel with a near mythical creature, Architeuthis dux, the giant squid. Homer refers to it in The Odyssey, and seafaring Norsemen made it part of their mythology. Shore dwellers have long known of its existence because dead specimens have occasionally washed up on beaches. Few have seen live giant squid and marine biologists still have not learned much about...