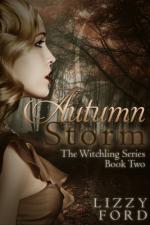 Everything you need to understand or teach Autumn Storm Witchling Series by Lizzy Ford.

Autumn Storm is the second novel in the Witchling Series by Lizzy Ford. A new girl comes to Nataniel School who, despite total amnesia, feels a connection with the school and the people in it. As Autumn struggles to figure out what that connection is, she finds herself drawn to both Turner brothers, especially wild and dangerous Decker, who, in the aftermath of Summer's death, has begun to embrace the Darkness.