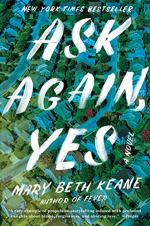 Get Ask Again, Yes from Amazon.com

Everything you need to understand or teach Ask Again, Yes by Mary Beth Keane.

Ask Again, Yes tells the story of two families' struggles with mental illness, alcoholism and the demands of life for police officers. The novel is set in and around New York City starting in the 1970s and follows two young police officers, Francis Gleeson and Brian Stanhope, who eventually move in next door to each other in the suburban town of Gillam, 20 minutes from New York City. Their children, Peter and Kate, fall in love and help heal the rift between the two families that opens when Brian Stanhope's mentally ill wife, Anne Stanhope, shoots Francis Gleeson in the face. The novel is told in the third person and illustrates how love can help heal issues like mental illness and alcoholism.