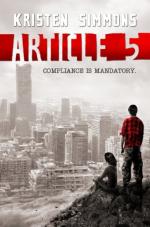 Get Article 5 from Amazon.com

Everything you need to understand or teach Article 5 by Kristen Simmons.

Article 5 by Kristen Simmons follows the story of Ember Miller, a 17-year-old girl who tries to go unnoticed as the United States descends into chaos following a devastating war. The country is now run by the military in accordance with the ultra-conservative Moral Statutes, which include a ban on single parenthood. When Ember's free-spirited single mother is arrested for non-compliance of Article 5, Ember's need to save her is complicated by the reappearance of Chase Jennings, her former neighbor and boyfriend, who is now a cold-hearted soldier.