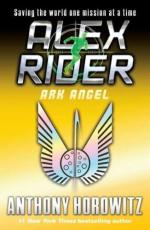 Get Ark Angel from Amazon.com

Everything you need to understand or teach Ark Angel by Anthony Horowitz.

Anthony Horowitz's Ark Angel is the story of a young boy who has been drawn into the very grown up world of espionage. Alex Rider is fourteen, but that does not stop him from being the top operative for the British intelligence agency, MI6. This story begins shortly after Alex has been shot. An assassin attempted to kill Alex, but thanks to a low curb just at the right moment, the...