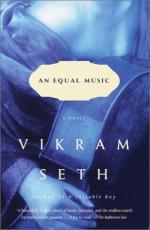 Get An Equal Music from Amazon.com

Everything you need to understand or teach An Equal Music by Vikram Seth.

The novel's central theme is suggested by its title, which Seth has taken from a sermon by the early seventeenth-century English poet and churchman John Donne.

A passage from the sermon, in which Donne describes the entry of the redeemed Christian soul into heaven, serves as the epigraph to the novel: And into that gate they shall enter, and in that house they shall dwell, where there shall be no cloud nor sun, no darkness nor dazzling, but one equal light, no noise nor silence, but one equal music, no fears nor hopes, but one equal possession, no foes nor friends, but one equal communion and identity, no ends nor beginnings, but one equal eternity.

Unlike Seth, Donne is speaking only indirectly of music. His "one equal music" is a metaphor for perfect peace, contentment, harmony, balance—a state to be attained in the heavenly realm, but...

Vikram Seth
7,922 words, approx. 27 pages
The tradition of the great writers of preindependence India, such as Raja Rao, R. K. Narayan, and Mulk Raj Anand, has given way to Indian writers of the global village led by two important and fundame... Read more

Vikram Seth
4,051 words, approx. 14 pages
Vikram Seth is an Anglo-Indian writer perhaps best known for his monumental, nearly 1,500-page novel on domestic and political life in mid-twentieth-century India, A Suitable Boy (1993). But it was as... Read more
Download the Study Pack