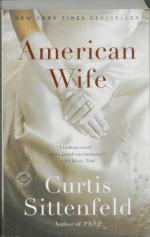 Get American Wife from Amazon.com

Everything you need to understand or teach American Wife by Curtis Sittenfeld.

Can the wife of a president have a set of beliefs different from her husband’s and still be considered supportive of him? This is one of the questions that author Curtis Sittenfeld sets about to answer in his novel American Wife. Sixty-one-year-old First Lady Alice Blackwell looks back at her life in an attempt to determine if her recent decisions have jeopardized her husband’s presidency. Themes in the novel include the differences in lifestyles between the rich and the middle class, the constancy of racism and the mixed beliefs about abortion.