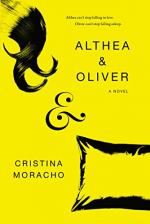 Get Althea & Oliver from Amazon.com

Everything you need to understand or teach Althea & Oliver by Cristina Moracho.

Althea Carter and Oliver McKinley are high school students in Wilmington, North Carolina. They have been best friends since they were 6 years old and still live in the same neighborhood. Althea and Oliver are inseparable friends but Althea starts to want more of a romantic relationship with Oliver but he is not ready for that. Their situation is complicated by Oliver's having Kleine-Levin syndrome which causes him to fall asleep for weeks at a time. Althea and Oliver have sex during one of his sleeping episodes and when he learns about it later he is angry that she had taken advantage of him when he was not fully awake. Their relationship is tested for the first time ever and Oliver leaves for New York City to take part in a medical study about his condition. Althea feels remorse for her behavior so she tells her father she is going to New Mexico to see her mother for Thanksgiving but drives to New York instead to see Oliver. Unfortunately by the time Althea arrives at the hospital, Oliver is in sleep mode again so she is forced to find a way to survive until she can see him again. Althea contacts friends of some people she knows back home and moves in with them in a commune style environment. By New Year's, Oliver is awake again and he tracks down Althea and they spend the holiday with Althea's new friends in New York. They have sex again and realize that they will always be friends but there is no romantic relationship for them. Althea decides to stay in New York and Oliver decides to take the medication recommended by the medical study and returns to Wilmington to complete his senior year of high school.