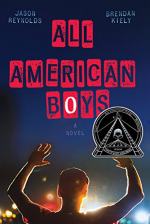 Get All American Boys from Amazon.com

Everything you need to understand or teach All American Boys by Brendan Kiely and Jason Reynolds.

All American Boys is a novel by Brendan Kiely and Jason Reynolds. The story is alternately narrated by two teenage boys from Springfield. The first is Rashad Butler, a black boy wrongfully accused of stealing, who falls victim to the police brutality and systematic prejudice that is so prevalent in American law enforcement. The second is Quinn Collins, a star student and basketball player who witnesses the event, and struggles to decide whether he should speak up, or forget this ever happened. The two boys, each in their own way, battle to make sense of the horrific racism they witness, and strive to bring justice to prejudice that exists in law enforcement, sacrificing their own interests for righteousness in America. The novel explores themes of racism, police brutality, maturity, and family.