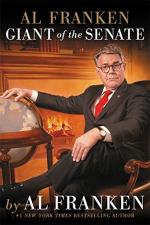 Get Al Franken, Giant of the Senate from Amazon.com

Everything you need to understand or teach Al Franken, Giant of the Senate by Franken, Al.

Al Franken's Giant of the Senate is a coherent blend of part memoir, part satire, and part political philosophy. With the underlying goal of demonstrating how his professional and political journey prepared him for this unique moment in history under President Donald Trump, Franken recalls the most memorable and meaningful lessons from his childhood in suburban Minnesota, his education at Harvard, his summers spent following the Grateful Dead, his experience as a writer for Saturday Night Live, and his eventual venture into the political realm from the opposite side of the spectrum in showbusiness. Blending his traditional sharp humor with his uncensored, raw political analyses, Franken offers a reflective commentary on his life paired with an active call to action against the present administration.

The Al Franken, Giant of the Senate Study Pack contains: