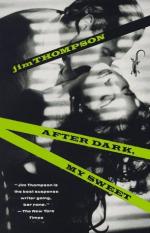 Get After Dark, My Sweet from Amazon.com

Everything you need to understand or teach After Dark, My Sweet by James Thompson.

After Dark, My Sweet Summary

"Collie" Collins begins the final quest of his life as he had many others, with no clue as to why he was put on Earth. Unable to find the significance of his life previously, he was a prize fighter who defined his existence with his fists. In a fit of rage, he killed another fighter in the ring, then took up residence in a series of mental institutions. Thompson emphasizes the lack of control over fate of his protagonist when another character tells Collie, "You're inherently decent with a lot of good, strong moral fibre, but that isn't enough." This should be enough for anyone, but because people do not exist in a vacuum, they tend to be influenced by others. Thompson closely studies this idea of influence, which remains mostly negative, and is one reason why humans often bring out the worst in one another.

The After Dark, My Sweet Study Pack contains:

After Dark, My Sweet Short Guide