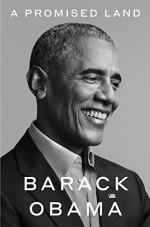 Get A Promised Land from Amazon.com

Everything you need to understand or teach A Promised Land by Barack Obama.

A Promised Land is Barack Obama's political memoir told from his first-person point of view. He recounts his early life in Hawaii and Indonesia through his first term as president of the United States. The narrative focuses on the major events of Obama's presidency such as the aftermath of the 2008 financial crisis, passing the Affordable Care Act, the nuclear disarmament of Iran, and other crises in the Middle East. The major themes of the memoir include Obama's conflict between his idealism and reality, the role of the media in politics, and the impact of partisanship on social change and public discourse.