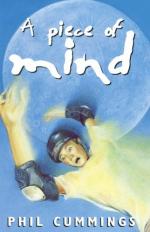 Get A Piece of Mind from Amazon.com

Everything you need to understand or teach A Piece of Mind by Phil Cummings.

A Piece of Mind Summary

Matt wants to be part of the group so he allows his friends Chunk and Fraser to talk him into doing things he really does not want to do, such as putting his hand in a dead cat's mouth, teasing an elderly neighbor's dog, and skateboarding down Devil's Hill. Hovering behind the moon in a spaceship, a group of Cartharians are waiting and looking for a new planet to inhabit now that theirs has been overtaken by an ice age of vast proportions. They want to use their mind web on someone easily led—someone like Matt, because if it works on him, they can use it on others until they control the planet. Matt finds himself acting in ways he never has never acted before, frightening himself, his family, and his friends. And above him, in the spaceship, he has a friend who does not want...

The A Piece of Mind Study Pack contains:

A Piece of Mind Short Guide