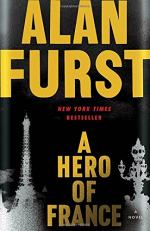 Get A Hero of France from Amazon.com

Everything you need to understand or teach A Hero of France by Alan Furst.

A Hero of France Overview

Alan Furst's historical spy novel, A Hero of France, takes place in Germany-occupied France early in World War II, and follows a self-organized group of French citizens called the Resistance. These citizens find and shelter British air pilots who have been shot down over French territory by German forces, and -- against the will of the ruling German military -- smuggle the pilots back to neutral borders, so that they can resume their pilot fighting against the Germans. The novel follows a middle-aged Resistance member who uses the pseudonym Mathieu, who must devise increasingly sophisticated methods as the war drags on. When a secret agent infiltrates Mathieu's inner circle, he successfully dissolves the group before any are significantly punished by the Gestapo.

The A Hero of France Study Pack contains:

A Hero of France Study Guide