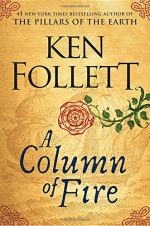 Get A Column of Fire from Amazon.com

Everything you need to understand or teach A Column of Fire by Follett, Ken.

A Column of Fire Overview

Ken Follet's epic, Column of Fire, is a historical novel that follows the lives of dozens of different characters in the midst of religious and political war between England and the rest of the world. Protestants such as Ned Willard and Sylvie Pelot fight against Catholics such as Rollo and Margery Fitzgerald in a war of tolerance versus control. Only one side can win. This novel explores how love, religious fervor, and ultimate power can lead to terrible corruption.

The A Column of Fire Study Pack contains:

A Column of Fire Study Guide