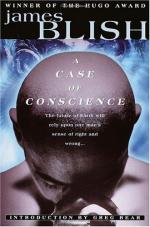 Get A Case of Conscience from Amazon.com

Everything you need to understand or teach A Case of Conscience by James Blish.

A Case of Conscience Summary

The social concerns, which are central to dozens, perhaps hundreds of science fiction works of the period, are actually secondary to Blish's main purpose in A Case of Conscience. Their role is merely to provide supporting evidence. What Blish is really interested in, and this was to become the theme of much of his major fiction in the years to come, was the problem of evil and, more specifically, the relationship between evil and secular knowledge. Blish was a trained scientist and a technocrat by inclination, but, over the years, he became increasingly dubious of the value of scientific research. In the Cities in Flight series technology made possible the salvation of humanity. In A Case of Conscience, however, it is very definitely a double-edged sword.

It is secular knowledge, after all, which created nuclear weapons and gave humanity the ability to destroy itself. In Blish's novel, technology...

The A Case of Conscience Study Pack contains:

A Case of Conscience Short Guide

James (Benjamin) Blish
8,985 words, approx. 30 pages
James Benjamin Blish began writing stories for the specialized science-fiction magazines during the 1940s while he was an editor of a trade newspaper in New York. Although he had published dozens of b... Read more
Download the Study Pack