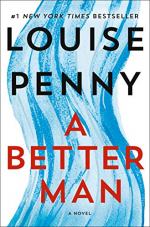 Get A Better Man from Amazon.com

Everything you need to understand or teach A Better Man by Louise Penny.

A Better Man is the fifteenth installment in the Chief Inspector Gamache series by Louise Penny. In this installment, eyes are on Armand Gamache as he returns to work in the Sûreté after he has been cleared of charges in a drug raid that left several officers dead and others badly injured. While investigating the death of a young woman, believed to have been killed by her abusive husband, Gamache must come to terms with his own human nature. Themes in the novel include the truth versus perception, the signs of abuse, and the dangers of social media.

You might also be interested in:
The Beautiful Mystery
A Fatal Grace
How the Light Gets In
Still Life
Louise Penny
The Long Way Home
Kingdom of the Blind: A Chief Inspector Gamache Novel
All the Devils Are Here
The Madness of Crowds
State of Terror