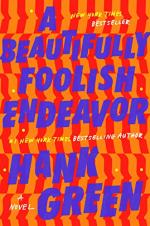 Get A Beautifully Foolish Endeavor from Amazon.com

Everything you need to understand or teach A Beautifully Foolish Endeavor by Hank Green.

A Beautifully Foolish Endeavor by Hank Green is the sequel to An Absolutely Remarkable Thing, a science-fiction duology that follows April May, an average girl in her 20s who finds an alien statue called Carl and becomes a viral political pundit. At the start of this novel, it has been five months since April was presumed dead and Carl has disappeared. Her friends discover that April is still alive and working with Carl to save the world from Carl’s brother, who is behind a new virtual reality experience that can take over people’s minds. This book explores the following themes: exploring the unknown, exploiting disadvantaged populations, the appeal of selectivity, the influence of fame, and balancing one’s public and private identities.