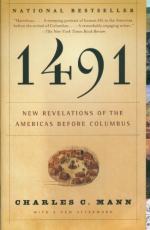 Get 1491: New Revelations of the Americas Before Columbus from Amazon.com

Everything you need to understand or teach 1491 by Charles C. Mann.

1491: New Revelations of the Americas Before Columbus Overview

When did the Native Americans of both South and North America arrive? New discoveries point to a time that predates what conventional wisdom has taught us for centuries. The belief that these people were savages and contributed nothing to the advancement of man is largely debunked by the scientific facts presented in 1491. The Indians changed their environment to suit their needs and managed it so that it wasn’t destroyed by overuse. Many scientists are beginning to believe that the Amazon rainforest wasn’t a natural phenomenon at all; rather, it was a creation of the paleo-Indians.

The 1491: New Revelations of the Americas Before Columbus Study Pack contains: